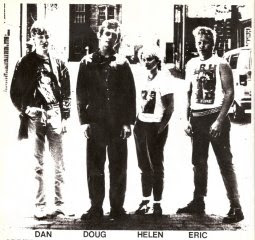 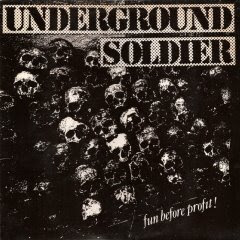 
Underground Soldier
Posted by Curious Guy at 11:21 AM

Didn't know that John. Well I was actually referring to the early Dischord period.

That would have been Dug, the bass player that was also in Beefeater. Actually, US were before that. I saw just about every one of their shows & got to be pretty good friends with both Dug & Helen. They were a lot of fun live & were super nice people. They had a great demo that came before the LP & was even better. I'd love to find it again, my copy wore out years ago. Thanks for posting this!

This link gets you to the Landlords LP.

Link is fixed now. I fucked up a bit. Thanks for the extra info Borneojimmy. Would like to hear the demo as well.

A truly great album! They got the production just right on this one. Like Vice Squad but better!

Hey Curious Guy,
How's it goin' have you received the package yet? Let me know. Hope everything is cool Cheers>RG

I was the drummer in Underground Soldier, or as it was popularly spray painted "UxSx"...

My eternal thanks for taking the interest and time to digitize and host this!

It's on my iPod as of this minute, and I'm completely stoked. Again, thanks.

Hi Eric, thanks for leaving a comment here and the appreciation.

Never heard of this band before.
So thanks a lot for introducing me another unknown gem... :-)

At last! I heard the song "Headaches" on the Funhouse punk radio show in Houston in the 80s.. I never knew who performed it.. Now at last I have this old favorite of mine!

The LP arrived in Chile in the hands of a Philadelphia Skeater in 85, it quickly became one of our favorites along with Minitemen, The Dead Milkmen, Beefeater, The Cramps, etc..
The disc was lost there and were only recorded on audio tape.
Great band.

That link no longer works, could you please repost it? Thanks!

Could you please re-upload this LP the link's dead i've been looking every were for this album & i can't find it! :S