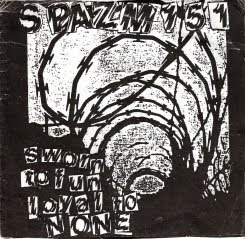 Great Texas HC punk from the late 90's. All their stuff is worth tracking down. They did a 2nd 7" for Havoc, an album for Mind Control and a split album with React on 13th Floor.
Here's Spazm 151's 1st release, on Uncontrolled Records, a small local label that also released EP's of Ballistics and Federal Offense.
Not going to say that this 7" is their best but it's still excellent stuff. It's also the hardest release to find.

1. Get Out Of My Life/Frustration
2. Rent A Cop
3. Fuck Your Progress
4. Frozen World 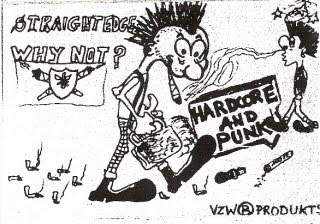 First in a series of 2 comp. tapes released by 2 guys I knew very well back in the day. They also put up shows and made some international comp. tapes as well.
Here you'll find all Belgian bands. Some are known, others are lost in complete obscurity. A lot of different styles as well. This tape was issued in 1988. It strikes me, being from Belgium, that some bands I've never seen live and know nothing about.

Mad Noise were from Ostend I think. Not very noisy but basic punkrock.
Struggle For Peace is a band I know nothing about.
Agathocles is the most wellknown band here. 3 early tracks recorded live.
The Dirty Scums is known as well. All live tracks as well (and ripped as one track).
Dawn Of Liberty were from Limburg and played political HC with a metal edge. The only non-UK band that can be found on the 'Vile Peace' comp. LP on Peaceville. Last song 'Divided' is not on the tape and 'Blokkade' is cut off unfortunately.
Bad Influence is the 3rd wellknown band. These tracks were taken from the very 1st demotape.
Who Cares? were also from the coastal area. Recorded live. One of the members later started crossover band M.O.P. who played a lot of gigs. This band came to an end when the drummer shot his ex-girlfriend. Sad but true.
Full Time Drinkers were from Ostend as well. Had Vos on lead vocals, one of the guys who compiled this tape. Lives in Thailand now I guess.
Telefoon Hijgers and Factory Noise are both unknown to me. Last track of Factory Noise is cut off as well.

It's a great snapshot of the Belgian scene in the late 80's. My friend (from whom I borrowed this tape) has the 2nd volume as well.
Agathocles, The Dirty Scums and Bad Influence still exist to this day (although mostly with a different line-up).
Uploaded to megaupload 'cos it's a pretty big file (90 mins. tape)