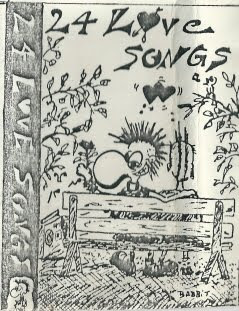 1st comp. tape released by Smurf Punk Tapes out of Belgium. This tape was compiled by Mokka, one of the core members of the Smurfpunx Collective. This tape was released in 1985 and includes diverse HC punk bands from Europe.
I also have the 2nd comp. tape on Smurf Punk Tapes which I need to rip in the near future. Read about a 3rd one called 'Thrashing With Your Parents' but have never seen or heard of this one before.
Bands included are: Maniacs (BRD), SOD (Sweden), Political Asylum (Scotland, UK), Aktive Notwehr (BRD), Enola Gay (Denmark), Savage Circle (Italy), Bedrövlerz (Sweden), Disgust (Netherlands), Post Mortem (UK), Man's Hate (UK) and Dirty Scums (Belgium).
I guess the title of the tape is a pisstake on all those shitty comp. albums released in the 80's with so-called romantic love songs. 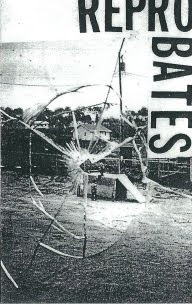 Reprobates were a short-lived HC band from Toronto, Canada. They recorded the excellent 'Stress' 7" for No Way Records in 2008 and then disappeared. They also delivered one song for the Stress Domain comp. 7" 'Sick Of Fun'.
Probably some members are doing other bands now but who can follow it all?
Here's the 2007 demo. 5 tracks of which 'Abandoned City' and 'Rat Maze' were re-recorded for the EP. 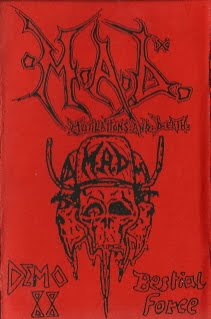 Here's an obscure cult band, playing some grindcore/deathcore. They were from the French part of Belgium, actually from Charleroi, one of the most depressing towns in Belgium.
Sean of Damaging Noise posted this one as well a few days ago. Seems that this demo was planned to be released as a split LP with Agathocles but it never came out. Didn't know that.
The initials stand for Mutilations And Death. The band was managed by The Phantom, an older guy who came to some of the Smurfpunx gigs in Aalst in the late 80's. From what I know, he was an obsessed collector of all kinds of underground extreme music. Most notable about him was that he has one arm.
Sean didn't have a sleeve so this one is included as well in the file. Also the backside with the lyrics which are pretty silly. But you need to know that French-speaking people aren't well versed in English.

Mutilations And Death
Posted by Curious Guy at 10:31 AM 5 comments: