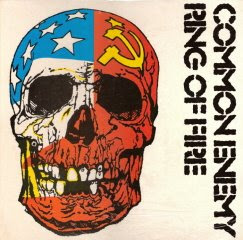 Ring Of Fire were from New York and released this 7-track album in 1984 on their own Live Cheap Or Die Records.
No info to be found on them. While most bands were playing hardcore, Ring Of Fire went back to the traditional punk sound although played fast and with distortion-less guitar.
'Common Enemy' is an anti-cold war song in the best tradition, without falling into patriotic shit. 'Sex Song' deals with the use of sex for advertising. 'George' is about wrestling as it seems that the band members are wrestling fans. 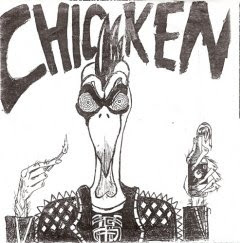 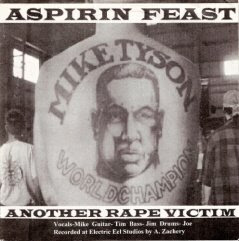 Aspirin Feast is one of the better bands that came out in the late 80's. the late 80's & early 90's were a desperate time when it comes to hardcore.
The 'cop-friendly' band released the 'Police Beat' 7" on French label Urban Alert. Their demo which is their first recording appeared on the 'How Do You Call The Cops On The Cops' 7" released a few years later. The band split up in 1992. Guitarplayer Tim and bassplayer Jim started Chicken. Jim does vocals in this band. Mike and Joe started Laceration. 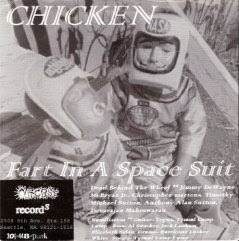 Chicken did one 7" on their own Pot Pie Records in 1992. Don't be put off by their silly name and artwork, it's decent stuff.
Outcast Records released a posthumous split 7" of both bands in 1997. Each band has one song on each side.
If you like Aspirin Feast, you'll like Chicken as well. Although longer songs and slower tempo than Aspirin Feast, they still have the same aggressive touch.

Both Aspirin Feast 7"s can be found on Lo-Res Viscera here. 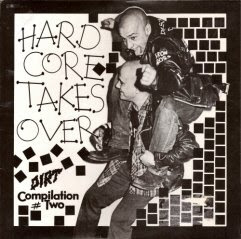 A great collection of New Jersey hardcore punk bands, released in 1983. All tracks were recorded live at the Dirt Club in NJ, hence the subtitle 'Dirt Compilation Two'.
It seems that the Dirt Club wasn't into hardcore bands playing in the beginning but had to give in anyway.
8 bands doing 2 songs each.
On the frontsleeve Byron Snotts and Harpo of New Jersey's Finest (or N.J.F.).
TMA is the first band. Already posted their debut album so you know what to expect.
Next one is the Phil Scalzo Band. I know nothing of them.
Mourning Noise did a 7" back in the day and there's a discography CD on Grand Theft Audio. Sometimes described as the hardcore version of the Misfits.
Side one closes with the Mad Daddys. Not really a hardcore band but worth a listen.
Stetz is the first band on side B. Released an album a few years later called 'Songs Of Experience'.
Sand In The Face is not that obscure. Did an album on Jimboco Records and were featured on the 'Mastertape Vol.2 ' compilation. Odd to see them doing an anti-nazi song called 'Auchwitz' (sic) while I've read some members turned nazi.
No info on the next band 13-Day Vacation.
Last band is Genocide. Known for their split album with M.I.A. as well as for the ridiculous 'Submit To Genocide' album. Silly lyrics all the way.

Hardcore Takes Over
Posted by Curious Guy at 6:33 PM 11 comments: 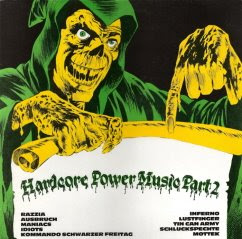 Here's the 2nd part of the series issued on Mülleimer, released in 1984. Way more bands than on the first volume and also much more diversity.
Inferno and Maniacs already appeared on the first one.
Other wellknown names are Razzia, Tin Can Army, Ausbruch and Mottek.
Razzia was one of the longer running bands. Their last release, the 'Labyrinth' LP is from 1995 although with a different singer.
Ausbruch did 2 albums, 'Harte Zeiten' in 1985 and the 'Auf Die Alten Zeiten' CD in 1994.
Mottek present an early version of a song that later appeared on their 2nd album 'Riot'. The later version has English lyrics.
Tin Can Army released a split album with Maniacs on Mülleimer and a 7" 'Be Invited'. There's an anthology LP released on Assel Records a few years ago.
Lustfinger started as a punkband but changed their sound to metal and later more rock.
Idiots is the Oi! band on this one.
Schluckspechte and Kommando Schwarzer Freitag never released anything else besides the songs appearing here. Schluckspechte is Deutschpunk while Kommando Schwarzer Freitag have a sound of their own and are one of the best bands on this compilation. 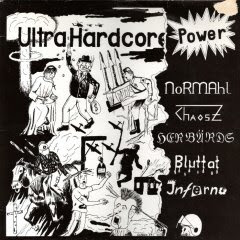 Another interesting compilation from Germany released in 1983. It's the first comp. on Mülleimer, one of the bigger German punk labels together with Aggressive Rockproduktionen and Weird System.
5 bands on this one ranging from Deutschpunk, Oi! and hardcore punk.
Normahl had all their early releases on Mülleimer.
Bluttat did 3 albums which have been reissued on Assel Records.
Herbärds is the Oi! band here. Did one album on Mülleimer as well.
Chaos Z drift more into postpunk territory, a style they would continue in the follow-up band Fliehende Sturme. Mülleimer released the 'Abmarsch' 7".
Inferno gives us 4 raging tracks of which some didn't appear on their albums. Their classic 'Tod Und Wahnsinn' LP originally on Mülleimer as well. 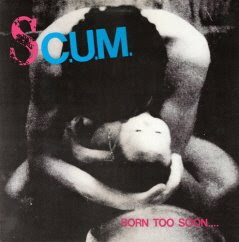 Sole album of this Montreal band. S.C.U.M. already existed from 1980 but the album was released in 1985. They also appeared on the classic 'It Came From The Pit' comp. LP. They also appeared on that other classic comp. 'PEACE/WAR' on Rradical, the label of MDC.
Not that I care what colour of skin people have but it's not very common to have a black singer fronting a punkband.
My copy is the original pressing on Psyche Industry. This record was also pressed in the UK on the legendary Children Of The Revolution label from Bristol. 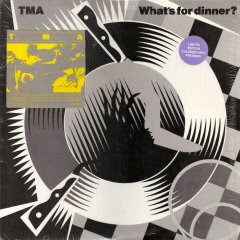 Cool album of this New Jersey band. TMA seems to stand for Tim Mike and Al, 3 members of the band although there's a 4th member called Dave on vocals.
'Whats For Dinner' was released on Jimboco Records in 1984.
My copy is a later pressing as the colours differ from the original sleeve. There's also a sticker on the frontsleeve (btw artwork is horrible!) with a MRR review of the album written by Tim Yohannon.
'Who are these guys? Well, whoever they really shred. TMA play totally fast gnarly thrash with lost of hooks and tunes. Tight and clean too.The lyrics are totally punkrock: bitchin' and moanin' 'bout everything.'
Their first vinyl appearance was on the 'Hardcore Takes Over' comp. on Dirt Records (which I will post later).
They did a 2nd album in 1987 called 'Beach Party 2000'.
Great hardcore punk in the style of Angry Samoans. 20 tracks in less than 27 minutes.

V/A What Doesn't Hurt Us Makes Us Stronger LP 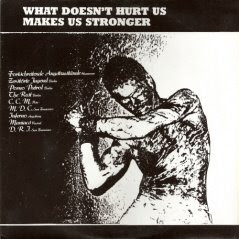