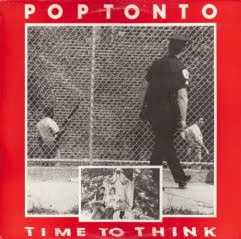 Not so wellknown album of Poptonto, HC punk band from Richmond, VA. This was the 3rd release on Disrupted Records, the label of Prevaricators. Released in 1986.
This is what the Flex site writes about 'Time To Think': the structure of the songs is very simple, but the music has a lot of power and drive, and the production is good, too. This reminds me of the simpler side of early LA hardcore, especially the cool chunky guitar sound. Good record, even though it was released a few years too late.
On '7 To The Sky' and 'Right To Life', the band got help from Slugfest. Don't know what this could mean. Seems that Slugfest was another band from the area. Last song 'Sponge' was sung by guitarist Scott Wagner. The weakest song: it almost lasts for 6 minutes.
The album is dedicated to David E. Wagner who died before the album was completed.

US Of Shit/Funeral Shock - Split 7" 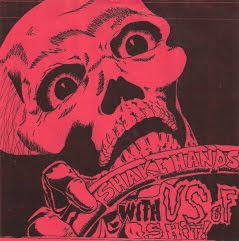 My most recent release posted here. This split 7" was released in 2003 on the very small Wolfman Records label and pretty hard to find.
Funeral Shock may be known to a few of you. They have members of Capitalist Casualties, Spazz, Deadbodieseverywhere and Wuzor and have a slew of releases on Controlled By Plague/Tankcrimes, Six Weeks and Cowabunga. All of them are worth checking out. Great 80's style hardcore punk in the vein of Bad Posture, Sick Pleasure. 'Burnin' Hell' is a punked up version of a song by blues legend John Lee Hooker.
Don't know anything about US Of Shit. Their only release I guess. 7 very short songs of lo-fi, raw old style HC punk. There are only 6 titles/lyrics on the sleeve. No title for their 5th track. 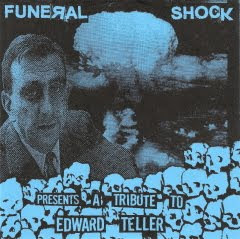 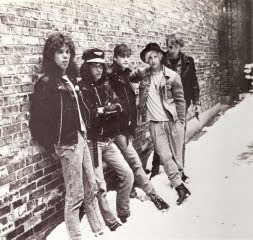 First and only album of Wisconsin band U.S. Distress released on their own Stress Records label in 1988.

U.S. Distress already existed from 1984 or so, releasing a 14-track demo full of raging hardcore punk. There seems to be another demo released in 1987 called 'Nowhere Fast'.
On this record, the band evolved to a more rocking sound. More midtempo songs although it contains a few shorter and faster tracks. Seems they got bored playing HC and went for a punk sound with guitar leads and all. Most will prefer the early sound I guess but this record is worth a listen.
'Ballroom Blitz' originally by Sweet. 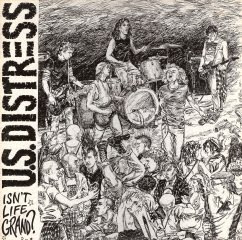 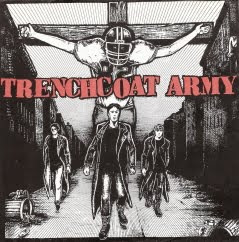 Great 7" of this NYC band. Learned about them on one of the comp. 7"s on Kangaroo Records.
I copied from what's written on the Mad At The World Records flyer that comes with the 7":
six songs of raw and misanthropic hardcore punk from this NYC based outfit that contains the very same people that brought you the seminal NYHC zine Guillotine. Having finally got into the studio long enough without resorting to kill each to offer this EP of fast minimalist and noisy hardcore. Trenchcoat Army presents a view on hardcore music every bit as authentic as bands long gone, without resorting to the rhetoric established by the current thrash revival.
500 copies pressed and sold out from the label. Recorded and released in 2000. 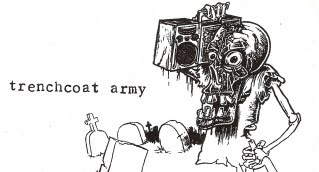 1. Lost
2. Whose Life Is It Anyway
3. Bottom Feeders
4. Say You Love Satan
5. Retribution
6. Beginning Of Your End