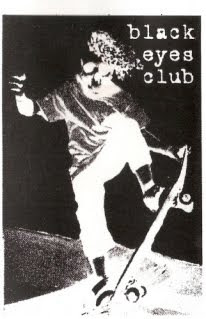 Here's a pretty obscure demo tape I could obtain this year. Black Eyes Club was a short-lived HC band of Ontario who were into skating as this tape is a benefit for the Hamilton Skateboard Assembly.
Black Eyes Club have a strong early Hüsker Dü influence. They even cover 'Lifeline' of them.
There were plans for a 7" on Schizophrenic Records but the band already fell apart. Too bad.
Don't know when the tape was recorded but must be the first half of this decade.