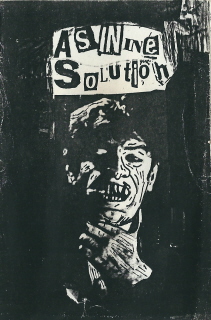 Got some requests to rip and post the Asinine Solution tape. Asinine Solution were from Chippewa Falls, Wisconsin. They released 3 EP's between 1996 and 1998. The 1st one 'Your Wisconsin Friends' is almost impossible to find; only 200 copies pressed. The other 2 are more wellknown. 'My Dad's A Goat' was issued on Beer City Records, the 3rd one 'Cause Effect' on their own Asinine Records label.
This tape combines some basement recordings of which some of the songs appear re-recorded on the Beer City 7". The other stuff is a live recording with old singer Lee Costa and has a few songs off their 'Your Wisconsin Friends' 7". Think the tape was released in 1997, in between the 1st 2 EP's.
Expect some raw recordings here with each song crudily ending by the stop button of the recorder.
There were a lot of great HC bands from Wisconsin in the 90's. Also check 10-96, URBN DK, Default, Stand Off, Bitchslap, The Scuzz, ... 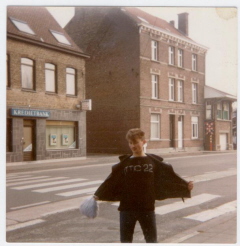 Punkband from the "Westhoek', I think from Veurne. Don't know a lot of them but one member was later in Disgorge.
Attic 22 also recorded a demo. Mad Mohawk is in contact with some of the ex-members but no result for the moment. Hopefully it will show up in the future.
Never caught them live back in the day but here's a recording that ex-member Steve sent to Mad Mohawk. Bitrate is 128 but it's a good live recording so the quality is OK. Steve can't remember the title of the 12th song.