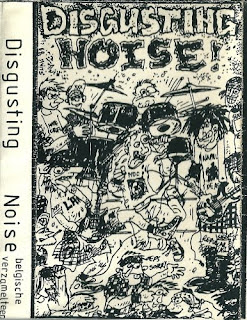 Comp. tape with Belgian bands released in 1988. This one was compiled by Dirk Vanhees, a guy from Beringen. Was in touch with him for a while, together with his good friend Chris Vanhoudt. Don't know what happened to them later but I found a Myspace page of Dirk and he's into other stuff now.
All the bands deliver 4 tracks each; some sent in live recordings. I didn't seperate those. I scanned the whole sleeve so you can check the titles there.
Bands on Side A of the tape are Heibel (with live tracks from their 2nd album), Disgorge (tracks from their 1st demo), Ear Damage (again live but awful quality), Dawn Of Liberty (live) and Capital Scum (mix of live and studio tracks).
Sde B has Hate Crew (live), Chaotic Contrast (rehearsal recordings), Chronic Disease (live), Tyfoon (live: this is a metal band which was a bit dubious as I'm told. Won't judge but starting the song 'Gaschamber' with "This is a song about Adolf Hitler" doesn't help much) and Mental Disturbance (demo tracks).
This tape came with a booklet but that one is stashed somewhere and it would take too much time to search for it.
This is a 90 mins. tape so I split the file in 2 links. 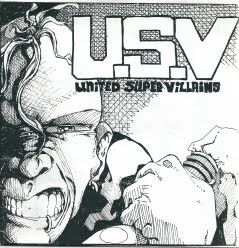 Very first vinyl recording for the great United Super Villains, or better known as U.S.V. Both bands on this 7" were from La Crosse, Wisconsin.
U.S.V. did a 7" on Havoc and the 'Chokeslammed Back To Life' LP on Deranged. Both aren't that difficult to get. The recordings aren't that powerful as on their their later releases but worth checking out anyway.
Don't know anything about The Krammies. They're not a bad listen but nothing special.
This 7" was released in 1997 on Punk House. 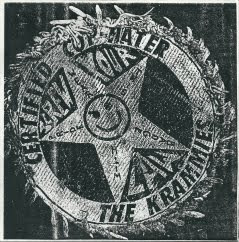 USV/Krammies
Posted by Curious Guy at 10:33 AM 2 comments: