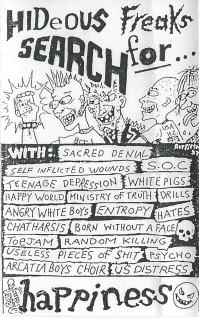 One of the many comp. tapes released by Chris of BCT. 'Hideous Freaks Search For Happiness' was released in 1984 and contains US-only bands. Track listing is a bit messy on this one. also had to equalize the sound level to some of the recordings.
Happy World from Denver, CO deliver one song of their 'Sad Gesture' demo.
Ministry Of Truth  were from Le Mesa, CA. One song from their demo. Also released an album 'Signifcant Others' in 1985.
Seattle band Drills continue with 2 songs off their 'Skull Death' demo.
One song of Angry White Boys. No further info.
Next are Entropy. 4 songs and the titles are mixed up somehow.
1 song of another unknown band called Catharsis.
Hates are a pretty wellknown punkband from Houson, TX. Already around from the late 70's.
Next are Grand Rapids, MI band Born Without A Face. According to Kill From The Heart there's an extra track. I probably tagged 'Only Human' as an untitled Hates song. There's a 2LP comp. out in a wooden box. Costs a small fortune but Blogged And Quartered uploaded a complete discography some time ago. Don't know if the link still works.
Toejam were from San Antonio, TX. One untitled track probably taken from their demo. Some members were also in Prenatal Lust.
Another unknown band called Random Killing with a Killing Joke cover. Not the Canadian band with the same name.
Useless Pieces Of Shit from Tucson, AZ finishes side A with 5 untitled tracks. More info on the Disillusion Music site and all their recordings can be found on their bandcamp page.
Side B starts with Arcata Boys Choir (misspelled as Arcatia Boys Choir) from Arcata, CA. Tracks from their 'Drug Free Youth' demo.
Next are better known Boston band Psycho. 4 tracks from their early (non-grind) phase.
Teenage Depression were from New Providence, NJ and released a cool 7" 'Skank Or Die' in 1984. Some tracks from that 7" appear on this tape.
U.S. Distress have been featured here before. Tracks from their '14 Songs, Oh Boy! demo.
Now the tracklisting gets very messy so sorry if there are mistakes. I think there's an extra track of U.S. Distress not mentioned.
Next are Sacred Denial from Chatham, NJ. Only 2 untitled songs mentioned but I think there are more. Sacred Denial released 5 albums.
Self Inflicted Wounds were from Sikeston, MO. One untitled song probably taken off their 'Keep Out Of Reach' demo.
The White Pigs from Hartford, CT deliver one untitled track. 1st 7" is powerful HC, later records are more metal.
Last band is State Of Confusion from Boise, Idaho. No title but probably taken from their 'Confusion Or Control' demo. S.O.C. released 2 cool albums that can be found here and here.