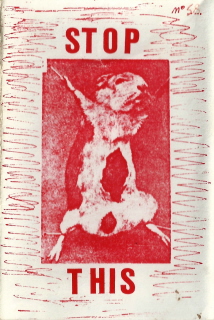 Late 80's comp. tape released in Belgium (Tielt) as a benefit for an organization against vivisection.
12 very diverse bands on this one.
Pestilence from Austria bring us thrash/grindcore. Later changed their name to Resolute.
German HC band Cox-Orange is next. They released a 7" on Amok Records.
Lärm again as the 3rd band here.
Exhaustless Revolt was a political HC band out of Antwerp. I think they did 2 demo tapes.
Next are Dark Age from Switzerland. Did an album on German label Beri Beri in 1990.
Last band on side A is Pszycho from Austria. A bit experimental.
Side B starts with Motus Vita Est from Yugoslavia. Tracks from their demo tape. Released an album on Sacro Egoismo in 1990.
Neolithicum is a pretty unknown HC/punk band from The Netherlands. Releases a CD 'More Kicks Than Brains' in 1994.
Ronald Ruck from Antwerp is next with some noisy HC bordering to grindcore.
Another band from Yugoslavia follows: Vuk I 7' Kozlic (or Volk In 7. Kozliček). Great HC/punk.
Germany's Cat-O-Nine Tails is next. Released an album in 1988 on Rise & Fall (Inferno's label).
Last band is Sound Pollution from Greece. Grindcore. 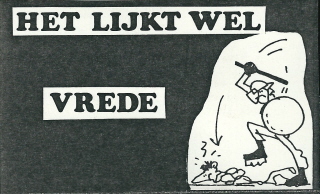 Another comp. tape on Ack Ack Tapes run by Kurt Boelens. Don't know how many tapes occurred on Ack Ack, but this one is the 9th. A selection of late 80's HC/punk bands from all over the world.
First band is from Paris, France. Krull play HC punk and released a 7" on New Wave in 1989.
Bad Influence from Belgium deliver 2 live tracks of their early anarchopunk sound.
Nasty Nation is next. Unknown band from Germany. There's an Oi! band with the same name from Germany these days. Don't know if it's the same band. If so then they're quite dodgy.
More wellknown are Swiss band Jaywalker. Tracks taken from the 'Oben Und Unten' tape.
Last band on side one is Lego'5, cool Dutch female-fronted HC band. There's even an extra track not mentioned on the tape.
Side B opens with wellknown Spanish thrashers HHH.
Next are Australians Gash with tracks from their 1st album.
More obscure is Action 33, a Swedish band playing HC/punk in the tradition of Asta Kask.
Next are Canadians Missing Link with 2 songs from their 'Murder Music' demo tape. They released a 7" 'Metalibut Torque Bastard' in 1987. More info on the tape on Equalizing Distort.
Inhuman Conditions are next with 3 tracks. Metallic HC typical for this time.
ENE from Groningen deliver us double-vocalled noise punk. My friend Erwin of State Fucker Records released a discography album a while ago (200 copies only I guess). Members later in Mushroom Attack and Fleas & Lice.
Last band are punk veterans Vortex.