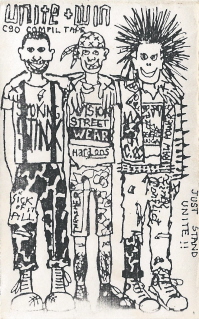 4th tape released by B-Product posted here. Like 'Gegen Nazis', this is an international compilation.
Some tracks were taken from records, others from demos and also some live recordings.
From Poland we have Dezerter (2 tracks from their classic 1st 7") and Armia (from Jak Punk To Punk comp. LP).
From France there's Scraps with 2 tracks from the 'Apartheid' 7".
From Holland: The Regiment (cool HC punk), Anal Terror (HC punk), Cry Of Terror (metallic HC, live), R.O. Conspiracy (2 tracks from the demo posted here before) and Bambix (all-female melodic punk).
From Scotland we have Oi Polloi. 2 live tracks and one studio track.
From Belgium we have Disgorge with 2 tracks from their 2nd demo, and Get Stuffed. This was a rock'n'roll punk band from Tielt.
From Sweden there's Heavy Hell and Van Sac (with 2 tracks from the demo posted sometime ago).
From Japan we have 2 tracks of Idiot Idolaters (released 2 7"s on Chicken Shit Records (Disarray, Insect Powder) ) and a live track of the Fuck Geez (band of Yumikes who runs MCR Company). Seems that all these were lifted from the Consumer Blackmail comp. tape.
Asbestos Rockpyle is the only US band.
And from Switzerland we have Dark Age with 3 tracks from their 7".
Last track on each side is cut off unfortunately. 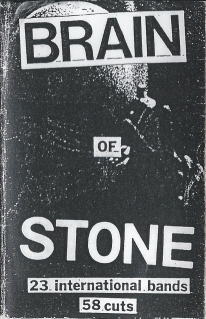 Here's another comp. tape on BCT released in 1984, 90 minutes and international.
First 3 bands on the tape all come from Denmark. Razor Blades are the most wellknown. They did a 7" and a split 7" with Flere Døde Pansere. This split 7" was re-released in 2009 and a comp. of  their demo, 7" and comp. tracks was also released on one LP.
Disrespect is the 2nd Danish band and I can't find any info.
3rd is Flere Døde Pansere mentioned above. Great HC with female lead vocals.
Next are Italians Not Moving with an untitled track. A cult garage rock band with a lot of releases on labels like Electric Eye and Spittle.
The rest of side A are all US bands.
Next band needs no introduction. Early tracks from The Accüsed.
Next is one song of Schlong. No info but from the same area as The Accüsed.
Wallflowers from CA is next. one track. Already appeared on another BCT tape called 'Eat Me'.
Toxin III from Louisiana is wellknown for the KBD classic 7" released in 1982 on Vinyl Solution. Mix of tracks from the 1983 demo and live. More hardcore than the 7".
Another Louisana band is Snufflix. No info.
Next is an untitled track of Love Canal. Posted their album here before.
Diet of Worms from Oklahoma are next. Tracks taken from their demo that got re-released on a 7" in the 90's on German label Old World Records.
Nebraska band Power Of The Spoken Word deliver 3 tracks. Released a cult album 'Language Of A Dying Breed' in 1985.
Last on side A is Wild Hairs from New Jersey with tracks taken from their album on Mutha.
Side B start with another track of Wild Hairs. Then it's up to Canadians The Bill Of Rights with a track from their 1st 7".
Mental Crisis was a posi-band from Missouri and only released a demotape. Would like to hear it.
Killing Children from Indiana is next. They did a 7" on Gravelvoice.
Happy Flowers were 2 members of The Landlords (album posted here before) doing noisy demento stuff.
Another obscure band is Youthinasia from Illinois. No info.
Youth Korps from Connecticut are pretty known. They didn't last long but recorded a demo that was released on a 7" in the 90's on Dutch label Crucial Response. Short and fast songs.
Boston band Cancerous Growth are next. Shared members with Psycho and released some records on their own Ax/ction label.
Back to Europe with &*!!% from Germany. Can't find any info on them.
Another German band is Äni(x)vax. They were from Münster. Appeared on quite a lot of comps. back then. No records of their own.
Kanalkotzer! is another unknown German band. Tracks probably taken from the 'Peter Alexander' demo.
Last band is the wellknown  Vicious Circle from Melbourne Australia.