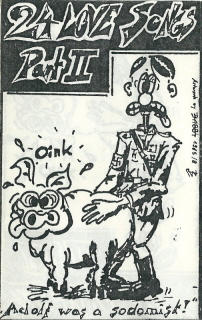 Got some goodies to rip from Brob, member of Smurf Punx and co-worker of the Vort'n Vis. Thanks alot!
I thought the '90 Minutes Around The World' was the 2nd release on Smurf Punk tapes but it's actually the 3rd. Never knew that this one existed until recently.
So '24 Love songs Part II' is the 2nd release on Smurf Punk Tapes (1986) and offers us 24 tracks of worldwide HC/punk and 5 tracks of poetry by Paddy Vacant And The Acid Heads from South-Africa.
Side A starts with A-Strant, the predecessor of Dawn Of Liberty. Cool HC/punk recorded live.Met singer Stefan Joosten again on the Antisect gig here in Belgium. Long time no see.
Next are FoH (Flag Of Hope) from West-Germany.
Bad Influence from Antwerp continues with 2 songs from their early anarchopunk phase.
Raw HC from Necrophilia is next. Band was from Yugoslavia.
Next is a very obscure band called Chaos S.A. from South-Africa.
S.D.T. follows with 2 tracks from their demo. Full band name is Suburban Death Trip. After they stopped, some members started a new band with the same initials.
Another cool band from Yugoslavia is next: Solunski Front.
Side B opens with South-Africa's most well-known Powerage.
Deviant Gedrag is next with 2 tracks from the demo I posted here before.
3rd band from Yugoslavia is Herpes Distress. Later shortened their name to Distress.
Germans Abfallbeseitigung are next. Punk with some wave influence.
Another rarity are the 2 songs of Pigs In Blue Glue. Recorded live. Probably your only chance to hear this band. Guitarplayer later joined Hate Crew.
Tape finishes with Repulsives, Brob's 1st band. 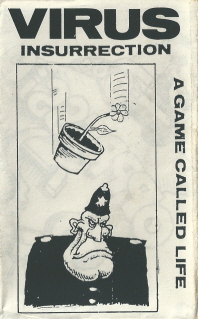 Virus Insurrection came from Preston, UK and were active in the late 80's. Never released a record but some songs of this demo tape appeared on a few compilations.
'A Game Called Life' is the band's 2nd demo. Expect some cool anarchopunk tunes here with songs dealing with meat eating, fox hunt, the system, war,  religion,... Drums are a bit sloppy from time to time. The songs are pretty short as well. As most of their contemporaries chose to play USHC, crust or melodic punk, Virus Insurrection stayed true to the anarchopunk sound of their predecessors.

1.  Meat's No Treat
2. A Game Called Life
3. Exploitation
4. Duke Of Beaufort
5. Images Of War
6. Systems Failed
7. Who Needs It / Smash The System
8. Christianarchy
9. No Questions Why
10. Old MacDonald Had A Duckburger

Virus Insurrection
Posted by Curious Guy at 8:57 AM 4 comments: