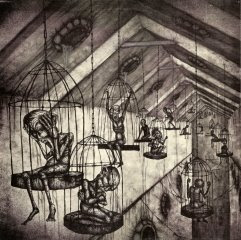 Thanks for that one! Is there any chance to find the 12" of a band called "Der Riss"? I think the 12" was called "All they do is images" but i'm not quite sure about it.
They had a cut on a Weird System compilation album if i remember correctly?

"They All Do Image" it's called actually. Don't have this one. Sorry DD. They appeared on "Life Is A Joke 2" but only on the extra LP which I don't have.

Wow! I thought I was the only other person in the world to own this record, but obviously not! I think this sounds like NO ALLEGIANCE & actually might contain a couple of members. A very unknown band & a pretty good one, too. The singer seems to think he's a vampire judging by the photos on the sleeve & lyric sheet.

An amazing album! Every track just explodes with power. I love the accented vocals on this. Good choice, CG.

Never knew Der Riss had a record out, DD. I remember they had a track called 'Images' on...er...some cassette comp maybe? So long ago.

Has anybody ever put together a Destiny discography? It seems like every month I find a new record on that label (such as this great one) which I never heard of before.

Thank you for this record. I only knew some track on german compilation and I like that. And thank you for your great blog.
Jean marc

All new links for the dead ones. Enjoy!