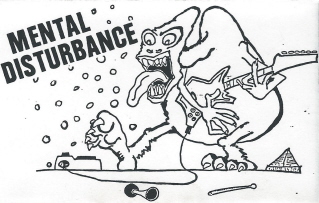 2nd demo of Brussels HC band Mental Disturbance, recored and released in 1989. They appeared on a few comp. tapes posted here before.
I've seen them live a few times. Always did a good show.
Mental Disturbance always had a strong USHC sound. They do a cover of the Adolescents here. Bassplayer Beastie does the vocals on that one.
Never heard the 1st demo tape 'Hard Of Hearing' released in 1987. In 1990 they did their only vinyl release; a self-titled 7" on French label Alternative Noise.
Guitarplayer Michel Kirby played in Arkangel, Deviate and Length Of Time afterwards.
Tracks 15 & 16 ripped as one track.
Track 14 is not a homophobic song. Back in the day people thought that anal sex was the way to get AIDS, which has been proven wrong. It's a song about this horrible disease in a period that people never survived when one was diagnosed seropositive.

Mental Disturbance
Posted by Curious Guy at 11:17 AM 4 comments: