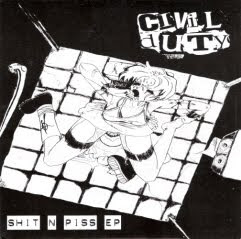 OK, here's another one on the Violent Reaction label. The 4th one actually. Expect more of the same hardcore punk with a punky edge, this time from Civil Duty. 7" was released in 2001.
Note: tracks 4 & 5 ripped as one track. 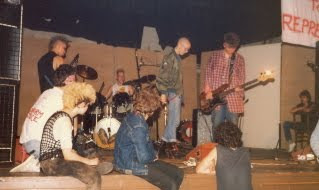 Here's another contribution by Brob as a complementary post to this gig on Smurfpunx.
One of the early Smurfpunx gigs together with Ack Ack, the comp. tapes label of Kurt Boelens.
Mokka of Smurfpunx released 2 comp. tapes, '24 Love Songs' and 'Around The World In 90 Minutes'. Don't know how many tapes Ack Ack released but you can find one here.
For more on Dutch band BTD and this gig, please visit the Smurfpunx page.
BTD also appear on a 4-band comp. album 'On Our Way to Fools Paradise'.
No tracklist. Almost 19 minutes of fast HC with fun elements. 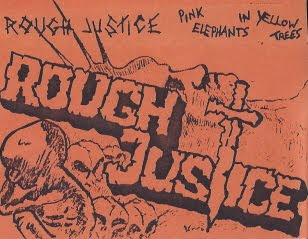 Got this one from my old time friend Brob, who was a member of the Smurfpunx Collective as a complementary post to his submission on the Smurfpunx blog.
Rough Justice were from Aalst, the place were a lot of Smurfpunx gigs were organized.
Rough Justice played that typical thrashmetal/HC crossover style that was popular in the late 80's. I must admit that I've never been a big fan of the genre but Rough Justice plays this kind of stuff very well.
I remember an all-dayer in Mol, where my old band Chronic Disease had to play with a shitload of now-forgotten crossover bands. Our band and the all-girls melodic punkband Bambix were a bit out of place on that day.
Never seen Rough Justice, but the singer is the brother of someone I know very well (didn't know that!). And for the Dutch-speaking Belgians (don't like to use the word Flemish these days): drummer Joost now plays in De Laatste Showband.