Bizarre title for this late 80's comp. tape, released by Unter Schwarzer Flagge Antimedien from Ahlen, Germany.
Quite an eclectic mix here.
Contains 2 tracks of Belgium's Dawn Of Liberty.
German punk is presented by Gunsch, L'Attentat, Erotischer Stuhlgang and P.O.Y. (Power Of Youth).
Poland's Dezerter deliver 'Kollabosong'.
Angor Wat from Norway bring us 1 live track.
Another live track is from The Ex.
Familie Kalaschnikov and The Violent Word have a postpunk sound. Don't know where the latter is from.
We get into experimental territory with Kämpfende Herzen, Reibach and Frankfurt's Solanaceae Tau, who released a lot of tapes, mostly on their own Nihilistick Noise label.

Bringing you the sad news that my account on mediafire has been suspended. Thanks to some LA company that claimed copyright violation on the 'Susan' Story' 12" of Cry Of The Innocent (on my other blog). A bit strange as former member Lee made a comment on that one a long time ago, without asking me to pull down the link.

Don't know what I'll do in the future. All links are down for the moment.
Posted by Curious Guy at 5:24 PM 8 comments:

No Numbers - Where Do We Go From Here? Tape 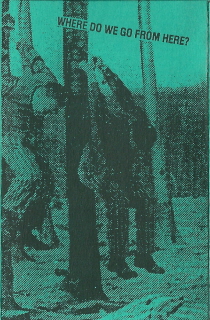 1985 demo tape of Tielt punk band No Numbers. 19 songs of mostly mid-tempo punk.  Some moody tracks like 'Someone I Could Trust' and 'Depression'. 'Vivisection' sounds a bit like CRASS. Also contains a cover of 'Wild Thing'.
No Numbers had Stinky in the band. He left to play with Repulsives in 1986. Otherwise no info on the band but Brob knew these guys so I expect him to give more info. Brob lend me the tape. Came with a lyric sheet/booklet but he put that somewhere else so don't have a scan of it.
13 tracks of the tape were released on a 2CD a few years ago with 3 other Tielt bands (The Dirty Scums, Repulsives and Get Stuffed), released by Pik of The Dirty Scums.

No Numbers
Posted by Curious Guy at 9:59 AM 4 comments:

V/A Thrashing With Your Parents Tape 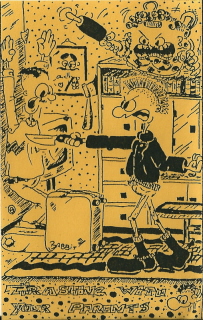 4th and final installment in the Smurf Punk Tapes series. Thanks to Brob for lending me the tape to rip.
Again 90 mins. of HC/punk and thrash from all over the world. Released in 1988 I guess.
Misanthropic Charity deliver 2 songs of melodic HC/punk. Band was from Denmark and had Electric Deads singer in the band.
No Fraud were from Florida. One of the best late 80's HC bands. Tracks probably from their demo. Their 1st 7" is a classic.
Corruption play metal-influenced HC. Both tracks already appeared on the 'People Of The Pit' comp. I already uploaded.
The 7" of O.H.M. has been posted here before as well. They deliver 3 tracks of which 2 are on the 7" (titles have been translated).
Virulence were a CA hc/crossover band. Released an album on Alchemy Records (Melvins, Poison Idea, RKL, Neurosis, ...). Later changed their name to Fu Manchu.
3rd band from Denmark is Leben Und Leben Lassen, better known as LULL. 3 live tracks.
Guillotine is the next Alchemy Records related band.
Yugoslav Sun is as you can read from the band name, from Yugoslavia.
False Liberty is pretty wellknown. Tracks taken from their great 'The Zoo Is Free' demo.
Both tape sides end with live tracks of Solucion Mortal; a political HC band from Mexico.
Hate Crew is the 1st Belgian band here. 2 songs that don't appear on the album on Punk Etc.
Another band from Yugoslavia is Crist. 2 tracks of heavy crossover thrash. Released the 'Powerdrive' 7" on No Profit Tapes in 1988.
Bad Influence is the 2nd Belgian band with the song 'Kick Out Religions'.
Electro Hippies from the UK deliver 'Vivisection Song'.
F.P.B. ws a Czech punk band. Name stood for Fourth Price Band.

Thrashing With Your Parents