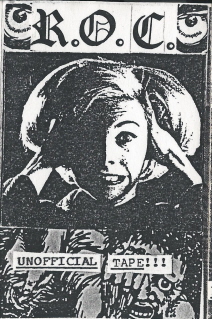 Late 80's HC band with metallic licks. R.O.Conspiracy were from Groningen and were called Intensity for a short period and then changed their name. Full band name is Radical Overthrow Conspiracy. Not sure but I think there's a link with Bloedbad, a great early 80's HC punk band that did some demos as well as a split tape with Jetset.
There are 12 tracks on the tape but only 11 titles mentioned. Don't know the title of the last song. Also a cover of an SSD song.
First 2 songs ripped as one track.

Here's the demo from Bruges punkband the Underdogs. As I am originally from Bruges, I don't know a lot about them. I got into punk a few years later so I never seen them live. Some members of Sperm did play as well as stand-in.
Underdogs appeared on the Punk Etc. comp. tape 'Allez Crachez' from 1982 and the "No Big Business" comp. album on Kleo in 1981. This "demo" actually compiles all those tracks.
No pictures of the band unfortunately but my good friend Mad Mohawk uploaded one song on Youtube.