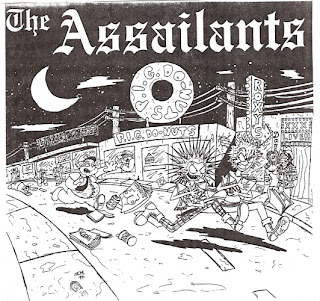 Here are the last ones on Violent Reaction. Both by The Assailants, VRR 1 and 5 actually. Violent Reaction was run by the people of The Assailants. The band, with a different line-up, was initially called Violent Reaction.
Both 7"s are a bit different. On the 1st one they had 2 guitarplayers and the songs dealt with their hate for boneheads and the system. On 'Hate Machine', both guitarplayers were replaced by one and the lyrics are more of the silly non-PC kind, not unlike Street Trash. Mike and Drew would later play in Street Trash. The 'Hate Machine' EP have a few different pressings/versions with different artwork. I scanned the sleeves of the normal version and the spraypainted version.
The Assailants also released the 'Modern Technology' CD in 2000, and a split 7" with the Swellbellys in 2002. Never heard those.
There's a 6th release on Violent Reaction by Scattered Fall. Not really a Violent Reaction release as there were some problems between the band members and Ron Ramirez set up a new label 'Deadpan Records' that only did the Scattered Fall 7". 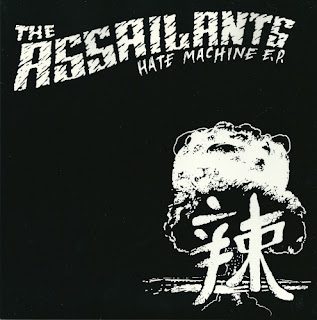 The Assailants
Posted by Curious Guy at 11:12 AM 3 comments:

Well here's another live recording of Antwerp band Dona Nobis Pacem. This one was recorded by my friend Vrokker in the 1000 Appeltjes. I think they opened for Extreme Noise Terror and Chaos UK.
Dona Nobis Pacem was an anarcho-punk band with a strong Antisect influence. Unfortunately they never recorded anything officially. There was a plan to do a split album with E.N.E. but that never happened. I think singer/guitarplayer Muffie was also in Brutal Society before.
Vrokker started recording when the 1st song was already happening. The last song is also cut-off due to the tape ending. It was a bis song; but you can hear that one on the other live recording.
The other live recording (from a split tape with Chumbawamba) can be found on No Longer Forgotten Music or Old Fast And Loud.

Sorry, no pix of the band.

Ripped as one long track (I beefed the sound a bit) but here are the song titles:
Coca-Cola
When Reality Stops
Some Love The Animals
If They Only Could Speak
Pornography Of Life
Skeletons Of War
Behind Suffering Lies
Bloodsports
Balled Of Nature (cut)