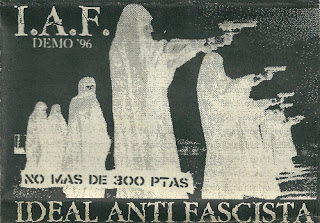 Cool HC band from Barcelona. Once met the bassplayer when on tour with Katastrophobia. We couldn't really communicate on a normal level as he only spoke Spanish and I can't speak a word Spanish. Cool guy though.
This demo shows the band in their 1995-96 period. One of the older singers left to play with E-150.
The band is better known with it's initials I.A.F. They did 3 split 7"s and one full 7". First split is with Brazilians Under Threat, released in 1994 on US label Japankore (one of the Drop Dead members?). Next split was in 2000 with fellow Barcelona HC band HOW. In 2003 there's the split 7" with Finn crusties Rähäkkä.
The full 7" 'Si No Hay Justicia Para Los Pobres' was released around 1996 I think on the dubious French label Sludge Records.
'Asesino' originally by Los Crudos. 'Unjustified Murder' originally by Drop Dead. 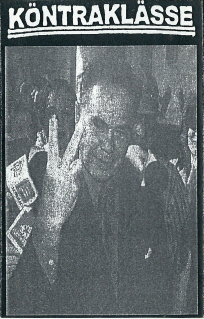 Köntraklässe
Posted by Curious Guy at 1:10 PM No comments: