V/A Do You Remember Rock'n'Roll? LP 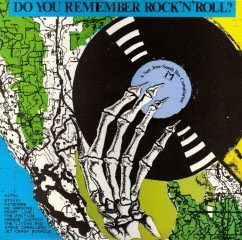 Regional compilation released on IM Records, the label of The Faction and it's offshoots.
One of those offshoot bands appear here as The Living End. Melodic punk sometimes using a piano. Has Adam "Bomb" Segal in the band.
The Faction appear here with 2 live tracks.
No Warning sounds as a crossover band, typical for the time.
Front Line also did a mini-album on IM Records.
Stikky deliver 2 very early tracks. Not as special as their later output.
Nitemare is speed metal.
Orange Curtain sounds quite dark and Jet Crash Miracle is more of an alternative rock band.
Steve Caballero of The Faction delivers a solo track.
Nothing earth shattering on this comp. I must admit. More of a document of what was happening in San Jose and the South Bay in 1986.

Do You Remember Rock'n'Roll?
Posted by Curious Guy at 2:16 PM

i love shit like this. probably wouldn't find it anywhere else, so thanx for posting!!
cheers

Fantastic record from start to finish, especially No Warning (who make crossover sound good!) Thanks for that!

I think you may have the best record collection in western europe.

dude thanks! always have been interested in finding out what else im records put out!-

From my hometown. Most of those bands and players are friends. Have been looking for this for awhile! Very cool. A request if you have it, Do you have that Frontline ep or the split they did with No Alternative. For those that don't know, Joe Sib went onto form Wax and Side 1/Dummy Records too.

Yep, I have that Front Line EP. Still need to rip it.

man if you could post that Frontline Ep you will have a friend for life!!!! I lost that Ep years and years ago. I would love to hear it again! If you'd like here is my blog. Add it if you'd like!
http://daysofouryouth.blogspot.com/

Please, the link doesn't work. can you upload the comp.?

New link for the Do You Remember Rock'n Roll? comp. Enjoy!

Sorry, but the link said: "This file is currently unavailable".

Can you upload in other link, please?