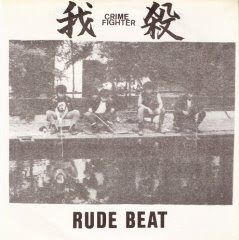 Released on the cult label ADK, run by Tam of The Stalin and G-Zet.
Gasatsu have more of a streetpunk sound than hardcore but thanks to the heavy and raw production of Tam, this sounds quite great.
Gasatsu also appeared on the Neo Punk Disordery-ADK Omnibus Vol. 2 comp. 7" with 3 other bands : Gabbell, Glycerin and Molugu.
They did a 2nd 7" a few years later on Neo Family Records but it sounds clean and poppy and isn't that interesting. 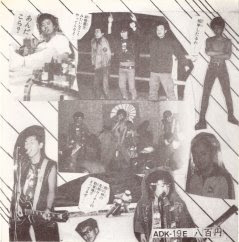 Your blog is better every day. Great music!

Ok (sorry, my inglish sucks, escuse me) emmm, I am looking for music for "Rapt" is a very good band from France
http://homepages.nyu.edu/~cch223/france/rapt_main.html

If you have music of them, would you share it?
Cheers amigo! :)

Awesome record! Some nasty production on this one. Great sleeve too.

Hey Toxik -- there is a Rapt tape here: http://la-cantatrice-chauve.blogspot.com/2008/10/rapt-definitive-farewells-tape.html

I only have Rapt on the Rapsodie comp. LP.
Thanks for the link Bobby.

Definitely a great post!
The 2nd song is 狂曲 and the 6th is 我殺国家 but the 5th is Puka Puka or Paku Paku?
Released in 1984 according to this great page:
http://www.veltedregnub.com/adkrecords