Extremes - From Both Sides LP 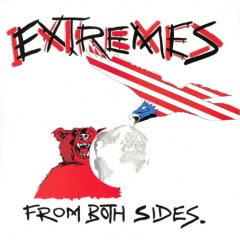 Here's another record from a band that appeared on the 'The Not So Lucky Country' compilation.
Originally they were called Human Waste and started in 1984. Phil MacDougal, owner of Reactor Records was on vocals back then. After some line-up changes, the band changed name to Extremes.
This album was released in 1987 on Cleopatra Records. Songs were recorded at Hardcore House by Smeer, guitarplayer of Depression and drummer of Gash.
There's an extra track 'Super Powers' mentioned on the backsleeve but it doesnt appear on the record.
A 2nd LP was recorded for Waterfront Records but was never released as the band split up. But it seems that there's a plan to release it one of these days.

Check more on the Extremes here.

I never get tired of the Cold War themed punk records! This is great stuff, as is pretty well everything you feature on SSC. Thanks!

Any chance of a re-Up?