Dis-Organized Bunch Of Fuckers - So Full Of Lies LP 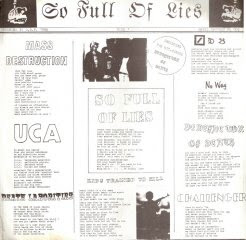 Here's the second effort of the Bremen punk gang Dis-Organized Bunch Of Fuckers. 18 songs in about 30 minutes. Great recording as well.
The sleeve is a bit weird. It's a fold-out sleeve with the lyrics printed on the outside and having a band picture on the inside. Not very creative me thinks.
The Finnish titled 'Ytheiskunnan Uhrit' means 'Victims Of Society'.
The band did another LP "Not Bound To Rules" in 1988 which I never heard before. Seems to be more metal influenced.
This album was released in 1986 on their own Pöbel Records label and was the 2nd release after their split with Nebenwirkung, posted a while ago. 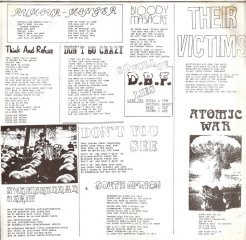 So Full Of Lies
Posted by Curious Guy at 3:58 PM

This rocks! A big improvement over the split LP in my opinion. Great lyrics too.

fantastic record, CG. thanx for posting that. this is exactly what 1986 sounded like for me.

Check out the DBF MySpace site and the Shattered Dreams site as well.