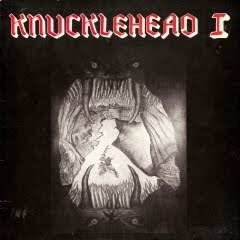 Last release on the Speed Of Sound label (see Underground Soldier).
Knucklehead was another HC band from Philly. Their songs are midtempo most of the time, with some metal riffs.Definitely an attempt to play crossover.
Thin production by Butch Vig who later on produced albums of Sonic Youth and Nirvana.

Really bad and also really good. A very interesting LP to hear. Heavy riffage for sure!

This band was actually from Madison, WI. One of the members of the band did live in Philly for quite a while though. Unfortunately, they broke up just as the album was about to be released.

Thanks for the extra info.

I was never really into the whole Crossover style but this past year or so I've started getting into it. I think I probably had a bad view of Crossover since so many great HC bands turned to mediocre (or complete crap) hard rock/metal. SSD totally dissapointed me in particular.

With that said, could you re-up this one?

New link. Enjoy! Crossover has never been my thing as well. Saw a lot of shitty crossover bands back in the late 80's.