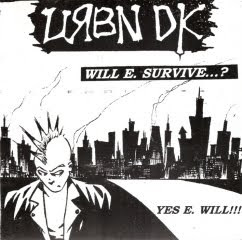 7th release on Will E. Survive and I think last release of URBN DK. Think it's a different singer than on the previous releases on Beer City and Power Ground.
URBN DK started already in the early 80's. More punk though. Bob, the original guitarplayer just took the name for a new band in the 90's, playing fast HC.
This 7" was released in 1997.