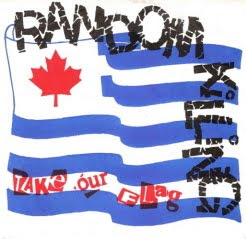 First and best release of this Toronto HC punk band. Released in 1986 on their own Aardvark label.
The 7" can also be found on the 'Re-Issued' CD from 1993, together with the 'This Whole World' 12" and some comp. tracks.
Random Killing also recorded a 2nd 7" called 'Kicked In The Nuts: A True Story!!' on Swiss label Resistance Productions. I do have that one if you're interested.

Random Killing
Posted by Curious Guy at 9:39 AM

This is very good. I remember skipping over some of their releases back in the day for who knows what reason. Please post more RK if you have it. Would love to find the discography CD, as well.

Hey Vince.How goes it?
Of interesting note for those who care.The band was offering their entire discography for free via good quality mp3's on their official website.I grabbed them all about a year ago.Don't know if the links are still good but worth checking out for sure.I had this 7"er back in the day.Good Canuck fun punk.

This is the Screaming Mailboxes Of Destiny 12" from your wants:
http://www.mediafire.com/?cqlzlw2wz2w

NMR but all info is included.

this one is great! I haven't listened to them in a decade, but played a few shows with them in 94-95, they killed it live. Toronto was fucking fun as hell on those tours. you should post the CD at your leisure, I would love to revisit the band in depth. (speaking of Toronto, ARMEDnHAMMERED was bad ass live as well!)

Gonna search that Random Killing site A&H.
I have also the 12".
Donut Duck, thanks for that one and good to hear from you.
Wizard, what's the name of the band you played in?

I was in canada in 1994 with MULTIPLE CHOICE, and then in 95 & 96 with FUCKFACE (same band, different name). We played Spiderfest in 94 & 95, and stopped through on the very foolish Victoria - Halifax leg of our 5 month North American tour in 96. We played Sneaky Dees at least two of those trips (it's still there I believe?). SHITFIT, ARMED AND HAMMERED, POLITIKILL INCORRECT, DIRTY BIRD and THE VAGABONDS were other bands we played with.

You played in Fuckface, cool. Only have that split 7" with Hickey. Don't know if the other records are easy to find though.

hey my names Jim. I was th singer for the the screaming mailboxes of destiny, i haven't heard this record in 20 years. thanks for posting it. Boy it sucks. Jim