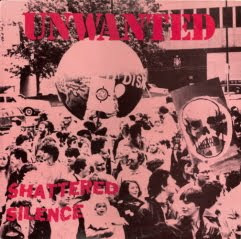 Let's stay in Canada for a while. Here's the sole album of Manitoba band Unwanted. They also appear on the BYO comp. 'Something To Believe In'.
'Shattered Silence' was also released on BYO (Better Youth Organisation) in the US in 1984. Seems to be a split release with Canada label Headbutt as the logo appears on the sleeve. Headbutt released also the Stretchmarks 7" and Some Weird Sin LP.

Unwanted
Posted by Curious Guy at 9:59 AM

Thanks! Another one I didn't have the day. Like many others, I only knew 'em from the SOMETHING TO BELIEVE IN comp. Pretty damn hot record on a debut listen. From a time when bands actually sounded different from one another. Cheers!!

Thanks for sharing this !

Amazing blog!!! Thank you!! Do you have the Public Service comp?

I gotta hear this again cuz the last time I heard I wasn't impressed. I remember it sounded metal.

The perfect crossover sound. Nice sleeve too. Thanks, Curious Guy.

has anyone seen the public service comp anywhere? cheers!

thanks! by the way, if you'll allow a bit of self indulgence, I named one of my old bands, Shattered Silence, after the title of this album

Well, I gave this a listen and it's what I remembered which was uninspired metal that ruined the hardcore scene during the mid-eighties.