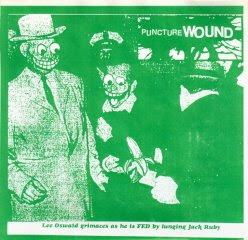 Puncture Wound was a Cleveland, Ohio HC band active in the late 90's. Not that I know alot about them but if you like Inmates, H-100s, 9 Shocks Terror or Gordon Solie Motherfuckers, then you'll probably like this one.
This 7" was released in 1999 on Bloodclot Records (fifth release) as well as on Human Stench (1st release), a now defunct label out of Pittsfield, MA. that reissued the comps. 'Last White Christmas' and 'I Thrash Therefore I Am' on CD (originally tapes on BCT).
Found a page on some Cleveland labels and related bands, if you're interested in that scene.
Most releases are limited and some sell out fast. Anyone who wants to get rid of his/her 1st Inmates 7"?

Hey nice blog. I've got a few of your requests in mp3 form in good quality.Depression,Perdition and Asexuals come to mind but I'll have to look to see if I have any others.If your want list is up to date drop a quick line back here and I'd be glad to send you some stuff....Cheers, A&H

A&H, that would be cool. If you prefer to mail me:
heretix99(at)hotmail(dot)com.

Check yer mail when you get a free minute.Bueno...

I have this 7 inch. For anyone seeking further info, this is members of Annihilation Time,Gordon Solie Motherfuckers,Upstab and lots of great Cleveland bands.

Re-up please and thank you?! (could ya reply if you do)