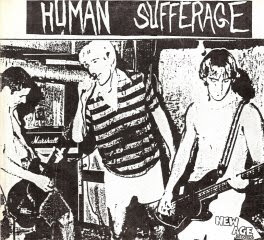 First record of Human Sufferage of Columbus, Ohio. Their 2nd album is 'Thank You Mother Dear' which I plan to post later. Both records were released on New Age, a local Columbus label that also released records of True Believers, Screaming Urge, Vertical Slit, Great Plains, ...
'No Place Like Home' was released in 1983 and comes with a comics newspaper. Here's what Tim Yohannon of MRR wrote on the record:
These guys have a great crunching garage punk and thrash sound here, and they come down hard lyrically on middle class mores and problems ranging from the effects of Reaganomics to psychiatric conditioning. The production is hot, and the record comes with all sorts of weird inserts.

Human Sufferage
Posted by Curious Guy at 11:11 AM

Thank you. I used to have the 2nd record but got rid of it during a foolish record purge. Never saw this one before.

thanks, always interested in hearing some old punk rock from my hometown.

...i wonder how many great records like this were lost in the used kids fire.