Here are both records of New Jersey band Bedlam. Some members, together with some members of A.O.D. ran Buy Our Records.
Lots of short songs with a sense of humour. Some were taken from TV series like Flintstones. 'Lost In Space' originally written by Jerry Goldsmith. 'Generation Landslide' originally by Alice Cooper. 'Burnin' Love' is also a cover but I don't know of who.
The only song I can't stand lyricwise is 'A.I.D.S.', another stupid rant with a homophobic tone. It seems that a lot of people back in the day thought that AIDS only infected gays and was only possible to get through anal sex. We all know better these days. 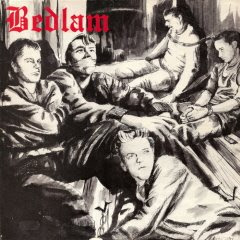 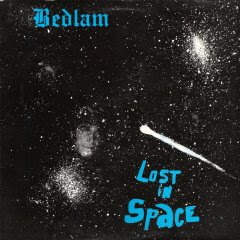 Bedlam
Posted by Curious Guy at 11:21 AM

Ive been blasting this in the morning, as i get up to go to work..I really like the recording you have, really rich sound. The other examples pale in comparison. yours has a depth that really accentuates the 'feel' of the original NJ sound. >JH

A decent hi-fi stereo is more than half of the work :)

"burning love" is by Elvis..

thanks for this !! great blog
cherrs from argentina

I was wondering if there was any chance of a re-up on this? The Mediafire link is not shockingly dead.

Would love to get these if you have a new link! Saw them back in the 80's and they were a blast. Had the album but it got destroyed in a flood. Thanks!

Got it! Thank you VERY much. Can't wait to listen to them again.