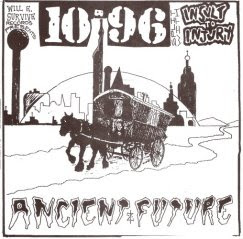 As half of the records posted here are from a good friend, he asked me to post this one here as he never heard the 10-96 tracks on this one.
10-96 were from Chicago and played ultrafast hardcore punk. They released 2 7" EPs on Beer City as well as the 'No Retreat' LP. All are worth checking out. I could rip and post them if needed. After singer Dean Dirt died, some members started Despite.
Don't know much of Insult To Injury. They did a 7" before called 'Hostile Behavior'. Not bad but more influenced by the late 80's with some mosh parts. Tracklisting is wrong on the sleeve for their side so see the correct one below.
Released on Will E. Survive in 1995.

Ancient Future
Posted by Curious Guy at 11:47 AM

Hi, you mentioned that you had the Frontline lp and possibly could rip it???? I would be one happy person if you could do me that enormous favor!!!! PLEASE!!!!!

awesome/ 10-96 are actually from Kenosha WI.

DUDE! I love this record, I lost it aover 10 years ago and have been searching ever since. If you have the I II I 'Hostile Behaviour' EP, I'd love to see a post of that, also the 10-96 EP that isn't 'Gas Bag', if you have it. Triple Thanks!!

so fckin thrilled i bumped into this post (via the gen enxcrement 7'' post that i actually have but in this era of mindless downloading, i cant be bothered looking for it in the 7'' box). anyway, i used to write to Will from Will E Survive records back in the day and he sent me GenEx 7'' (he sings there) and a cass comp of some of the songs from his releases. man, those Insult to Injury songs fuckin ripped and i couldnt find them anywhere until now. GREAT GREAT GREAT!!! the only bummer is that some years later i found out that they turned into some pathetic thuggish sexist metalcore gangsta wannabes. so tthanks once again for the posto of the split, and if you have any more Will E stuff put them up please! anyone knows the whereabouts of Will? id sure like to hear from him again

Troyanwhoress, thanks for the comment. You can also find the Snoopeez Tapeworm 7" here. I have all the Will E. Survive releases so I could post them if you need them.
Sad to hear about Insult To Injury going wrong.