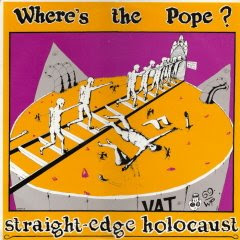 Now let's get back to Australia. Here's another fine record, this time of Where's The Pope? from Adelaide.
The sleeve art probably caused some problems with the straight edge kids. It's a bit of a simplistic assault but understandable. While XXX kids were fulminating against peer pressure, some of them used the same tactic as well.
Where's The Pope? started in 1985 and were influenced by the US skatecore bands. 'Jesus Gets Rich' is an attack on religion, while 'There Goes The Neighbourhoood' is an ironic aproach towards the racism in Australian society.
Never heard their 2nd album 'Sunday Afternoon Barbeques' but it seems to be not that hardcore anymore.
This mini-album was the last release on Reactor Records in 1988.

Where's The Pope?
Posted by Curious Guy at 7:56 PM

I owned one of five original pressings of this album. I followed them from "The Century Hotel", now "The Rosemont" in Hindley St in Adelaide where before they released Straight Edge Holocaust they played a song called "Fist Fucked", it went, 'I dont wanta be fist fucked, I dont want a great hairy fist shoved up my fucken ass, I dont want to be fist fucked, .... Good one Frank. Scotty was a great addition on bass on their third album. The second album "Sunday Afternoon BBQs" had such classics as, "We Want Your Beer" and while not as raw or punk was a greater success on the live scene for them in my opinion. I remember George from Verander Music was at The Century one night to hear The Pope belt out Fist Fucked. They spent a lot of years playing at 'Lennies' 'The Holdfast' and 'The Glenelg Lifesaving Club' before pokies destroyed the live music scene and everyone started to grow up. Great memories, THANKS.

Early popes helped to spread Christianity and resolve doctrinal disputes.After the conversion of the rulers of the Roman Empire (the conversion of the populace was already advanced even before the Edict of Milan, 313), the Roman emperors became the popes' secular allies until the 8th century when Pope Stephen II was forced to appeal to the Franks for help, beginning a period of close interaction with the rulers of the west. For centuries, the Donation of Constantine, later proved to be a forgery, provided support for the papacy's claim of political supremacy over the entire former Western Roman Empire. In medieval times, popes played powerful roles in Western Europe, often struggling with monarchs for control over the wide-ranging affairs of Church and state,[4] crowning emperors (Charlemagne was the first emperor crowned by a pope), and regulating disputes among secular rulers.