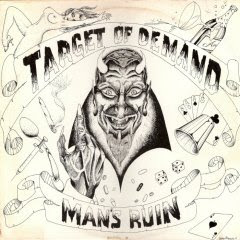 Here's a great but somehow overlooked hardcore band. They also appear on the 'When Men Were Men...' comp. LP posted a while ago.
They are a straight-edge band but their lyrics stay far away from the usual cliché topics of such bands. Most of them are attacks on the rich, the government,...
After the split, some member(s) formed the band Dissension whose 'Why Work For Death' is also a classic. They did a 2nd LP in the late 80's.
'Man's Ruin' was self-released in 1983.

A most excellent post! And the quality is top-shelf! I can't even tell you how many others have posted low, distorted, or defiled renditions. Thank you ever so much Curious Guy.
BTW: It's been an impossible endeavor to upload anything. My question is what could possibly be going wrong when it appears all is well till the time to display the upload link? I always get an error or illegal function dialogue at the end? >>>>Rg (aka a young acolyte)sic.

no low bitrate shitty rips here.
I really don't know what the problem could be Rg. Most of the time I don't have any probs with uploading. Which host do you use?
Hey, do you know Venice band Neighborhood Watch? They did a 12" back in the day but I don't have it (only on tape). Never seen that one on any blog I guess.

Fuckin' great to get a good recording of this at last! I agree with Rg that most (all!) of the versions I've downloaded have been pretty crappy. This rip brings out the power. Been listening to it going to/coming home from work & wanting to slam on the bus!
Cheers to you, Mr Curious Guy!!!

Yep sure do know Neighborhood Watch, Beowulf, Last Round Up, 918-V, Violent Outrage, Red Temple Spirits,EVOL! I don't have the NWatch, but I do have the 918-V demo, only has like four songs if I remember correctly. That's why I want to know about the uploading, my computer is old 8yrs (knock on wood). It'd probably be easier to send it to you the old fashioned way (mail). Yeah, cuz' I've tried mega-upload, z-share, and divshare to no avail. So i don't wanna promise something I can't deliver. My bud has the Neighborhood Watch, I'll see if he'll burn me a copy.
So if your interested let me know. No problems to send it by mail. I don't mind take it easy>>>Rg

Just found your blog and was easily blown away. Just perusing the first several pages, I saw stuff I haven't seen in years. I never thought I would find the Scum album ever again! Thank you!

I sent you an e-mail. Hope to hear from you soon. Check you later>Rg

Excellent, thanks so much! I had this album back in '83 & lost it over the years, the only other rip I was able to find was a pretty lo-fi & battered copy (skips, scratchy, etc -- hey, maybe it was MY old copy!), so this is a great score. I still sing lots of these songs in my head, will be nice to be able to actually crank it up again.

Just discovered your blog..great stuff! Just two things, maybe my memories bad, but I really do not recall those T.O.D. guys being straight edge, also I do not recall a second album being put out, was there one recorded? Anyways thanks for putting this up!
--Mike

This is crazy. Was thinkin about the old days in the neighborhood. For the hell of it I looked up the local band. Then I come across Target of Demand. I remember them playing at the park, Brians house and Jimmy's house and else where. I wonder who is left. A lot of people have passed since then.

Any chance you could re-upload this album please? I've not heard this for a million years and would love to take a trip down memory lane with these guys.