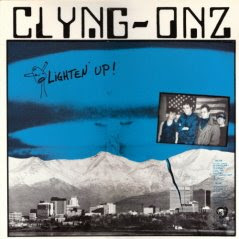 Here's the 2nd and last release on Anchorage, Alaska label Bullhead Records. This is a split album with 2 punkbands, Clyng-Onz and Psychedelic Skeletons, released in 1985. Quite different from the Skate Death album. Especially the Psychedelic Skeletons have some weird songs here.
Don't have any info on these bands. We should be glad that someone had the idea to release some Alaskan punk on record otherwise there wouldn't have been much known about punk in Alaska to the rest of the world. 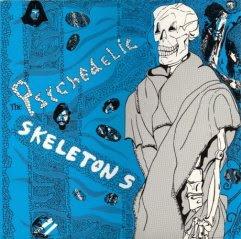 More punk from Alaska! Hot on the heels of SKATE DEATH comes this split LP of strange and diverse sounds. The CLYNG-ONZ are a more primitive, goofy band while the SKELETONS have a diversified sound from trashy grungy to weird dischordant noisefests.(MRR #35)

Clyng-Onz Live (check more hilarious videoclips(!) from them on YouTube)

just the other day i was thinking of post some of their clips on the blogsite. really great! and yess, good to know punk from alaska!
keep blogging!

Great! I´ve been looking to hear these bands for some time now. Thanks. Nice blog you´ve got here.

one of the members of the Clyng-Onz was Frank Harlen aka Bill Bored.

I first heard of him via his Warning fanzine he use to give away for free around Anchorage.
Frank also ran Bomb Shelter Videos in alaska & seattle

Probably sounds crazy coming from me but I lived in a house with the Skeletons about 1985 in Austin,Texas (8015 Lazy Ln.) I used to hear them practice every day about three or so. They were pretty good.Last I heard they were headed for NYC in their van, about 1986 or so.