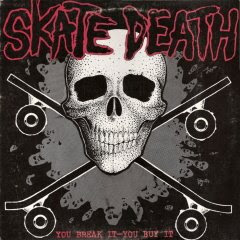 Already told you that I got some interesting records of a friend. Well here is the 2nd one (Porno Patrol was the 1st).
Skate Death was a HC/punk band from Alaska. There isn't much to be found on the punk scene in Alaska but one label called Bullhead Records managed to release 2 records in the mid-80's. The Skate Death album, released in 1985, is the 1st one. The 2nd one is the Psychedelic Skeletons/Clyng-Onz split LP which I have and plan to post later.
Skate Death play 20 tracks in about 30 minutes. Lyric sheet isn't included but I think most lyrics aren't that serious. This record isn't so easy to find these days but it's a great listen.

Skate Death
Posted by Curious Guy at 11:02 AM

this is bpretty cool im always down to find a new skate rock band! cheers

so glad you decided to start this blog curious quickly became one of my fav,s esp with posts like this cheers mate

You break it - you buy it is a priceless title for a comp like that!

I like the title "Life Is Such A Boring Job" :)

LOL, that one is great too!

Oh and thanks alot for ripping the AMUCK compilation. Do you post that on your blog?

For sure! Has alot of non-punk stuff on it as well.

Right, i have the tracklist!

I had a star crossed love affair with the bass player of skatedeath in 1981. I still love him!!!

I had this record in high school (mid 80's) and have been looking for a copy since then. I think they were from Alaska if I recall.

Coming from Anchorage in the mid 80's, I used to see these guys on a regular basis at the Warehaus - the local punk house in town. If you have the poster that came inside the sleeve, you have a real find. They were an OK band - good music to get drunk to and try to pick up punk girls in flannel.

Hery Joshua, good to know you saw them back in the day. Well I ripped it from a friend's copy and it doesn't have the poster inside.

I was the singer in this band.
I'm still in a band w/drumber dude.

Anonomous - Mike? Where are you nowadays? You guys used to rehearse in the basement where Dean and Even Perry and I used to reherse...

What's the name of your band now?

Was that the house where the 'rocker dudes'(!!) threw a bucket of rocks through the window while we were playing?
Fun Times!

I FOUND OUT ABOUT SKATE DEATH FROM ONE OF ITS OLD MEMBERS I MET DOWN HERE IN SD. THE GUY IS PLAYING MUSIC AGAIN, AND WANTS TO HEAR SOME OF HIS OLD TRACKS. HOW CAN I GET A LISTEN? RESPOND TO MY_RESUME_NOW@YAHOO.CA

do you know where Dean and Even Perry are these days?
i was briefly a (lousy) drummer in the ABDKs w/ them & would love to know they're up to

I had to leave a comment here, regardless of posts age, I'm glad archives such as this exist (blogs are great b/c you can find real info as opposed to endless bullshitz saturated pixeldusty). . .

This is a great album.

It contains what I consider to be one of the best skaterock songs of all time "better not snake me".

We were on family vacation in S.F. & my folks were coll, I went sakatin' round town (shame: gettin' harshed on heavy @ Embarcadero Center's Justin Herman Plaza. . .I felt like a total poser), but I also copp'd some wax @ R RaDICAL recordshop & this LP was amongst my selections.

. . .damn, I was such a dumb mixed'up kid, but I dug the record so much that I wrote to the band & I was stoked when I got shit back from them!. . .they were in Texas at the time, but I got killer goods w/ actual handwritten letters etc, stickers!!!(one of my fave SD stickers which I still have was a monkey perfectly sized to fit on my lightswitch, when switched on the monkey is erect, the switch fits perfect as his dingdong, pretty funny). . .

. . .sadly, some schmuck swiped it all from me, FUCK, I've lost so many jammin' records thru either thievery or trying to be cool & turn folks on & the record ends up not mine anymore, yikes, when I see the prices some of those old hXc rec's go for. . .

. . .I think fersure this LP deserves a repress, but what do I know? - here it is online for easy access anyways. . .shit, I just need to get one of those digi to cassette thingies b/c I like wax 'n tapes 'n paper. . .

Someone stole some records of me as well a long time ago. Ripcord, Heresy, Doom all disappeared from my collection.
I totally agree that this album needs a reissue.
Thanks a lot for the story. And welcome to the 40+ club :)

troylloyd-
If you happen to see this, find me
on facebook or whatever and I'll
send you some more crap.