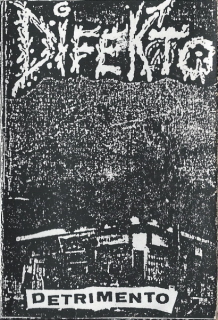 Rough, crusty HC/punk on this tape of Difekto. Not mentioned from where they are on the sleeve but the net says Brasil. Think the tape was released in the mid-90's.
'Detrimento' was released in the US on Minneapolis label Sin Fronteras. They began releasing unknown South-American bands like Execradores, Pirexia, Abuso Sonoro, ... Later releases are local/US bands like Misery, Consume, Calloused, Path Of Destruction, ...
Difekto also do a Chaos UK cover. Not mentioned which song and I can't recognize the song as well. It's not from their early period.