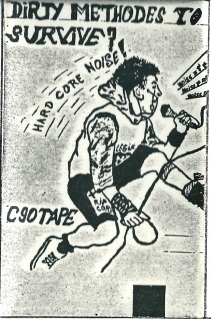 Last of the batch of tapes I lend from Brob for the moment. Cool title despite the spelling mistake (Methods is written as Methodes in Dutch).
1st comp. tape made by Stoffy of Geraardsbergen. A 2nd one was already finished as well but I never heard/seen this one. It was also a benefit tape for organisations against animal cruelty. A subject that punx don't care a lot about these days.
Capital Scum delivers 4 live tracks. There are 5 titles mentioned but I could only find 4 songs. So I labelled 'Slavery' as 'Black Mind Slavery'. They also do 'Gimme Gimme Gimme' of Black Flag.
Eindhoven's Afflict follows with 1 song 'Sharon'.
De Panne's Disgorge is next with 3 tracks off their 2nd demo.
Repulsives from Tielt deliver 3 tracks from their aborted split LP.
Dutch all-female punkband Bambix bring us 3 early tracks.
Next are Shooting Skippies from The Netherlands. Don't know much about them. Melodic stuff.
Side B starts with 2 live tracks of The Dirty Scums.
Next is Rough Justice from Aalst with 3 live tracks. Posted their demo some time ago.
2 tracks follow of French HC band M.S.T.
Dutch crossover band Cry Of Terror follows with 3 tracks.
Next are 2 Polish thrashcore bands, The Corps and Nadzo'r. There's an extra track of Nadzo'r not mentioned on the sleeve.
Tape ends with Swat and his girlfriend with their rapcore project Deadly Serious.

Dirty Methodes To Survive? - Side A

Dirty Methodes To Survive? - Side B
Posted by Curious Guy at 4:03 PM

Sorry can't seem to download. All I get is ads...
Brob

For your info: the Repulsives tracks are rough studio-versions. The final versions are on the Local Heroes CD (that Dirty Pik put out).
I've also no idea where the sound of the crying baby is coming from (before Noise Gate). That's probably Stoffy's doing ;-)
Brob

i saw Shooting Skippies once in Ertvelde "zaal Oemtata" in 88' together with Hund als Waffe (great fast hardcore punk also from Holland) Shithouse maniac (punk from Holland) and a 4th band not mentioned on the flyer, was Hate crew or Capital scum. Can't remember it.
Ertvelde home of Eddie Wally

could you reupload, please?
thanks!