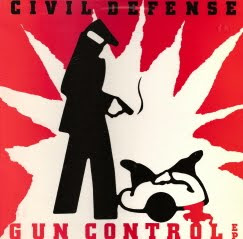 Punkband from Saint Paul, Minneapolis. First they were called Propaganda and contributed the the Kitten comp. tape, released by Hüsker Dü. They changed the name after adding an extra guitarplayer in 1982 and they played gigs with Willful Neglect, Hüsker Dü, and other local bands from that time.
MRR review:
What we have here is a bunch of medium-speed punk tunes with a melodic orientation. Songs like "Gun Control" and "Capital Punishment" (which has simplistic "law and order" lyrics) are straightforward numbers with good, strong hooks, but certain other songs are less memorable and lacking in energy. An uneven debut, but Civil Defense have potential.

'Gun Control' was released in 1983 on National Security Records.

looking forward to hearing this - cheers

When you get the chance, can you re-up this file? Thanks!

The link is dead again. Can you reupload please?

I knew these guys from waaay back in St. Paul, MN. Would love to hear
it but the link is dead. Would you post a new one? Thanks a lot!