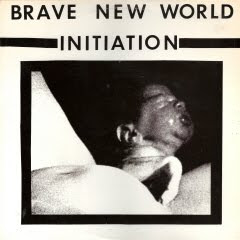 This one is for the more adventurous among us. Not your typical punk/HC record here.
The singer reminds me of John Lydon from time to time as well as Jello Biafra. A lot of diversity on this record. They even use keyboards on 'Sitcom'.
'Initiation' was the band's 1st vinyl release in 1984. Seems there's a tape released before this one according to KFTH.
Brave New World released all their records on their own Homemade Records label but Fartblossom Enterprizes helped distributing.
After 'Initiation' came a 3 track 7" and the 'Noise From The Heart' LP on which they move further from their punk roots.
If you want, you can check the other 2 records of Brave New World on my other blog:
Brave New World 7"
Noise From The Heart LP

A scan of the booklet with lyrics is also included in the file.

Brave New World
Posted by Curious Guy at 11:59 AM

FUCK YES!!!!!
The title track has been one of my main jams for many years. Every time I put in on around other folks - without fail - someone digs it and wants to hear more. I've been meaning to digitize this for ages but I'm so wrapped up in ripping tapes that I keep not getting around to it. The EP rules as well, but this tape is all new to me man. Thanks loads for all this shit, so fucking stoked!

glad to see your still posting obsure stuff mate..i,m using one of those crappy dongles to get online at the moment but will give this a blast when i can get online with a proper connection
keep up the good work
bernardo

Wizard, I don't mind you ripping tapes. It's what interests me most these days as demos are way harder to find. So keep up the good work.
Hey Bernardo, hope everything's OK with you. It's been a while. And what the hell are dongles?

its a shitty usb thing you use for the net,i aint got a landline at the moment so stuck with it for now.:(
bernard

I hate to keep bothering you with re-up requests but could you re-up these Brave New World records as well as the 'Poptonto - Time To Think LP'?

New link. Enjoy! Other links up soon on my other blog.