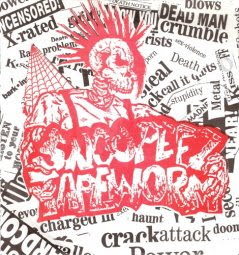 Snoopeez Tapeworm were a HC band from Chicago, active in the late 80's. They never released any vinyl back then but some recordings survived and were released on this 7" in the late 90's on Will E. Survive.
At least one member can later be found playing in Rat Bastards and Generation Excrement (posted a while ago).
Unfortunately the record doesn't mention any titles of the 6 songs so if anyone could help figuring them out, that would be much appreciated.

Snoopeez Tapeworm
Posted by Curious Guy at 10:58 AM

endless thanks for letting me now this great news about nuclear crayons!

Best band name ever ! Ahaha ! My copy didn't come with an insert either or a track list anywhere.

I was listening to this one today and thinking about posting it, so I did a quick search and saw you already had it up. I'll wait awhile before I put up a rip. I didn't know anything about these guys, but the Rat Bastards/ Gen. Excrement reference explains how it probably came into my possession. No track list on mine either. Wait, is that Murderface on bass?!?

Hi Rygar, I don't mind putting your own rip on your blog. Do what you want to do.

Bill Perez was always a great dude. He put out some good bands on Will E.Survive.

Gen Ex? Wasn't Sammy in that band? Im goin to see Warfilth tonight which is Jay from Rat Bastards band.