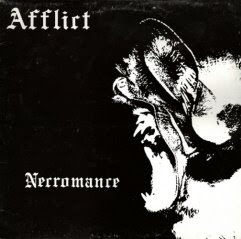 Afflict was a hardcore punk band from Eindhoven, The Netherlands. This is the 1st album released by the band in 1987.
They did a 2nd album 'I Want It, I Need It' in 1989 on German label Dissonance.
Afflict sound quite original and sometimes have dark themes if you look at the titles. LP comes with a small booklet with lyrics and fine artwork.
Bassplayer Scheet (Fart) played for Strelnikoff after the band split.

You're right, this is original sounding HC. I never heard of this band before and it's good. This record was one of it's few bright spots in the declining HC year of '87.

Hi there, I'm Ronny from Eindhoven. I've played a few years in Afflict, after they recorded Necromance. Before that I liked them just like you because of the original sound. So when they asked me to play (guitar) with them, I was very pleased. If you want to have any more information about Afflict or any other punk/hc bands from the 80's, maybe I can help. Let me know! greetings from Eindhoven RockCity