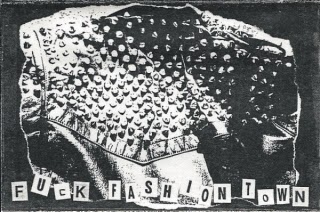 2nd release on F.F.T., a label run by the people of Argue Damnation. 'Fuck Fashion Town' contains 5 bands, all with a different sound.
Argue Damnation opens side A with 3 tracks of fast HC with a strong political message. They are the most wellknown on the tape with a lot of releases.
Next is Iboibosarugutsuwa. 2 tracks of which the 1st one is an instrumental. Pretty obscure stuff.
Side A ends with another obscure band called Hell Shannon. 3 tracks of cool, rocking HC/punk.
Side B starts with 4 tracks of noisy stuff by Filaria. The band was already finished. They existed from 1991 to 1993. Probably the only recording of this band. Unfortunately not the best sound.
2nd and last band is John Holmez. Only 2 titles mentioned but there are 3 songs. They play new school metalcore, a style I really can't get into. Too bad this stuff infected the Japanese HC scene as well.

Fuck Fashion Town
Posted by Curious Guy at 10:41 AM

could you put this back up? I used to have it "back in the day", ordered it from one of the guys in Disassociate, would love to hear it again!