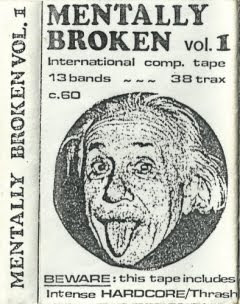 Compilation tape released in France sometime in the late 80's. Don't know if there were other volumes released.
Quite some variety here.
Psycho Sin opens side A with 6 tracks of noisecore. Pretty infamous band from New Jersey.
Corrupted Morals follows with 3 tracks. One of the better late 80's USHC bands (from CA).
Next is Finnish punkband Sabotaasi. Sabotaasi released 3 7"s (of which 2 are 1-sided).
Re-Ignition came from Port Moody, BC, Canada. They deliver 2 metallic HC tracks.
Wretched have 1 track, the title track of their 2nd album.
More noisecore from Deathnoise of France. 3 tracks.
Side A ends with the great Infezione from Italy.
Side B starts with one of the better bands here and what a surprise! It's The Heretics from Wales. This band had members who would later form the Cowboy Killers.
More metallic HC from Sodomy Law (Delafield, WI) and Adversity (Delta, BC, Canada). The latter did an album on UK label Manic Ears.
2nd French band is Eat Yourself. Quite raw and primitive HC.
Next are Crucial Youth. No introduction necessary I guess. 4 tracks of hilarious and over-the-top SxE HC.
Last band is Extreme Noise Terror who deliver 3 tracks.
Who could think that one release could include both Crucial Youth and ENT?
Oh yeah, the tape has 37 tracks, not 38 as mentioned on the sleeve. No track is missing here.

Please remember that March the 15th it will be Phil ENT's funeral. I've seen him playing with ENT in the late 80's, and also with Optimum Wound Profile in the mid-90's. Didn't follow ENT anymore after Phonophobia to be honest. Really sad (and a bit creepy) to see people around my age die. My condolances to his friends and family.

hi dear, yeah,it's good to be remembered that one nice guy has left us... i saw ENT only once in the late 80 s / early 90's . can't really remember. but it was great though. cool blog,too!!!cheers from germany.kalle