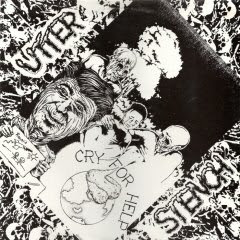 If you downloaded the 'Not So Lucky Country' comp., then you already heard of Utter Stench. The song 'Slappy's' appears here as well.
The band was formed in 1985 and this album was their only release. It was issued on Cleopatra Records in 1987. This label was also the home of Gash, Depression and Extremes.
Some members were fanatic skaters, so you could say that Utter Stench is a hardcore skatepunk band.
The band split up soon after the album was released. 2 members formed Terrorize, the singer became a member of Killing Time which changed their name to Mantissa.
Original member Borgy seems to be a wellknown skateboard manufacturer. I should say 'was', as he passed away in 1997, just before there were plans for reforming Utter Stench.

The whole band history can be found on Kill From The Heart.

wow i like, it reminds me of septic death! hell ya, thx!

hi, thanx for linking me, i linked you too, great blog, greets, kktz

Could you re-up this classic?