Chronic Disease - Who Will Pay The Price Of Our Disregard? Demo 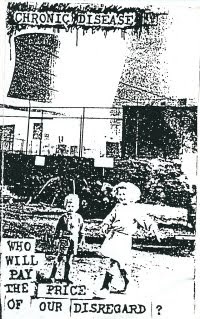 I promised madmohawk (a good friend of mine) to post the 1st official Chronic Disease demo.
Well what to tell about them? Chronic Disease was the 1st HC band I used to be in. I did the vocals.
We started late '86 with a different line-up. It was Vrokker on bass, Sling on guitar, Wimpie on drums and me on vocals. We rehearsed in Wimpie's parent's garage. I remember the drums being a small jazz drumkit with no cymbals so we used sawblades instead! With this line-up we only did 3 gigs. The 1st one was at someone's father's garage working place with local speedmetal band Anti Dote and I think The Mushrooms played as well. The 2nd was at Sint-Laureins (Sentenaarke) were we managed to hunt the audience out of the room to go to the bar to listen to Metallica. You know this was in full metal cross-over period. 3rd and last was in Oostende opening for Capital Scum, a revised No Debt, Ear Damage and Bad Influence. Absolutely no response and also some skinheads looking for trouble didn't add for a joyful experience. Then Wimpie was forced to leave the band by his parents due to bad school results. We had another gig in front in Bredene with bands like Mad Noise, Crap Society & Disgorge. As we were playing quite fast stuff at the time, we asked the drummer of Disgorge to step in for this one as he was the fastest drummer we knew back then. actually he played way too fast for us!
Then Sling moved to play drums and we asked Meyer of local rockband Toespieze (of which Sling also played drums) to play with us. So we were settled with this line-up until the end of the band in 1992. We also started to make songs instead of noise. A tape with 2 live gigs (Oostende & Bredene) and some rehearsal recordings were made by us, mainly for our friends.
We went to do quite some gigs, even a few in Holland but never toured. Bands we played with: Hiatus, Vortex, Verdun, Membranes, ENT, Doom, Concrete Sox, Econochrist, Legal Suffering, Chronic Death, Mind Exit, Chaos UK, De Kift, Nausea, Rose Rose, Mental Disturbance, Spermbirds, Agathocles, Bambix, At Last (now After All), Scraps, Oi Polloi, ...
'Who Will Pay The Price Of Our Disregard?' isn't actually our 1st demo recordings.We recorded some songs in the Mol area, in some garage, but the tape got lost. Vrokker found a very lo-fi recording of this session on tape. Hell, I can't even remember the titles of some of those songs anymore.
This demo was recorded in Bruges with the help of Vanne on 4-track and was later re-released with a live recording (Bissegem) by Bruno (later of Genet Records) as a benefit for ALF-prisoners.
The tape came with an A4 xeroxed booklet with lyrics and artwork/collages. All our artwork was done by Sling. Can't find the booklet for the moment though...
We recorded a 7" for Innerforce (released in 1990) and also a mini-album, originally planned to be released on Genet Records but the DAT got lost. The song for the Profane Existence comp. came from that session as well.
Vrokker also played in the Wasted Bunnies, Pertotal, The Barjackers, Crapulius Ceasar and now Seized By Man.
Meyer didn't really have any band but as a schooled guitarplayer went to study jazzguitar. He joined Seized By Man recently to play guitar.
Sling played in Rise Above, Pertotal and now in Soulwax.
I played drums for Capital Offence, Private Jesus Detector, and guitar for 4 Minute Warning, Holefiller, Katastrophobia and now Ravaged.
Were we a political band? Yes we were but later on we tried to avoid the cheap sloganeering and simple views of most political bands.
Were we a positive band? In the early days, yes. This was the time of bands like Heresy and organizers like Smurfpunx who brought a really positive vibe into the punk scene. Later on it watered down, and with growing up, we had/have a more darker view on things. In the late 80's-early 90's, HC was more of a straight edge thing, while we felt we had more in common with bands like ENT or Nausea.
Were we a XXX band? No. Some members were straight, some for a short time. Later on we got more into drinking and smoking dope, except for Sling who stayed straight through the band's existence. 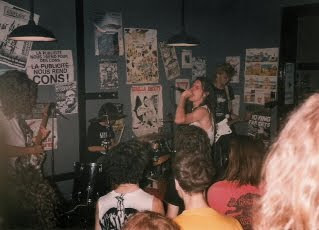 Thanks for digitalizing this Leffe!
Now on to the other stuff?!
Cheers
Brob

hip hip hurray.
It was about time that someone posted this classic demo. Chronic was the best band we have in fucking Belgium at the end of the 80's. i rememember that gig in Sentenaarkee (Chronic Disease-Creep Insanity and Burning Ambitions from france)and not all people from Sente were metalheads. I beeing there a few times in my 16 year old spikey drink and puke period and even being dj with my brother in law big Siesele. Actually they got more records from Conflict than Slayer.Chronic was not only a great band all members where the coolest people i've met in my whole life and all of them are still friends.I'm glad i was a part of the Brugge-crew before things and people started to change or died. It's a long time ago but still fresh in my memories. Thanx friend

Find of the day for me, Thanks!

Chronic Disease, perhaps/probably the greatest DIY hardcorepunk band out of the 80's.
Great, inspiring and definitely not forgotten!

After all these years...
It gives a great feeling to see a demo of a band i was involved in on a computer.Hundreds of memorys passing treu my head in a positive way.To have many good friends and people who respected us for who we were and stil.We may play in another hundred bands,the feeling will never be the same.It's eazy to say it was better,but it was.
To be the home-band at the vorten vis and getting rections from around the world,i feel great that i have been a part of this.One things for shure this is an honest DIY HC/PUNK thing and i hope you like it.Tanx to all the people for the support,you'll always be in my hart,greetz Vrokker.

I can't get enough of this demo. I'm 19 years old again.Going to gigs in netwerk,Bredene,... punxpicnic in Oostende,rehearsels in Stalhille with funny cigarettes protesting against pelsland in Hasselt and tons more.drinking lots of beer in de kelk,cactus,....Laughing with pette's stupid face.what a great time we had.I'm 41 now and still a heavy Chronic fan. Reunion??????I don't think so but never say never. Cheers Leffe en Vrots. and now a message from Sling and Meyer and everything is compleet.

I had your vinyl single. I wanted to listen to your music again and i checked on youtube and myspace and nothing appeared. Why Not???
You were a great HC Band !!!

This is my band:

Thanks for the appreciation Marion. Don't think Chronic Disease will ever appear on myspace.

Waw, this pic brings back memories.
Very good memories of an excellent time in my life of going to gigs, going to the pub, enjoying life at the fullest and having no worries cause I still lived at home and was healthy.
When I have a real crappy day and I'm laying in my sofa cause the pain is too bad and I'm too exhausted to move, I often think back on this time and think "No one can ever take this from me".

Great to read all those memories ,as I was there as well but remember almost nothing!Must have seen them over 40 times... ah the memories ,where the hell are they?
Oh here's one...oops no it's gone sorry
Tho something I won't forget are the people involved:Leffe(Confront the audience for fuck's sake!!!)Sling (What a drummer,and a one time PJD drummer,when Leffe went out to get a beer at Tivoli)Vrokker(oh boy they don't make 'em like that any more!!!)and Meyer,the John Mclaughlin of HC/Punk(back then)
Also "the crew" who went along to see them anywhere:Siesele (big and small :-))Billy,Brand(RIP bro),Pette
Shame they never released their studio recordings,which according to Vroks will happen someday!